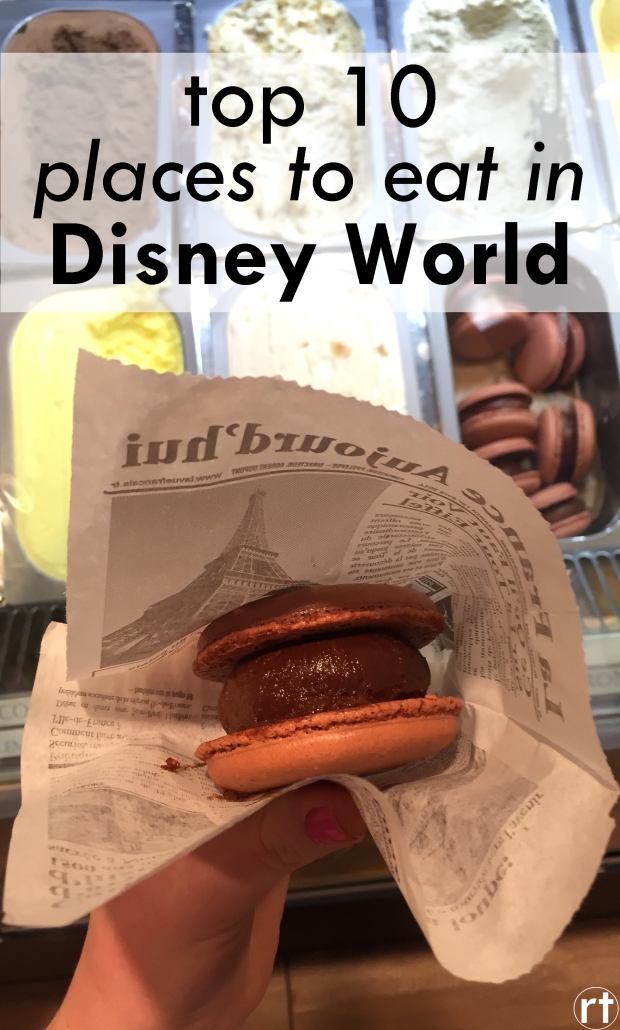 Amusement parks may not typically be known for their quality food, but Disney World sure debunks this idea. From barbecue nachos to chocolate macaroons, Disney offers a wide variety of cuisine and options for each guest. Here’s a list of my top 10 food picks at Disney separated by meals and sweets.

After hours of travel and ready to celebrate my dad’s birthday, we headed straight to Disney’s BoardWalk from the airport. I ordered the Pub Nachos (corn tortilla chips, barbecue pulled pork, chili, cheddar cheese sauce, cheddar with sour cream, jalapeños and pico de gallo on the side) and shared with the rest of the crew. However, the lively atmosphere with so, so many TV screens couldn’t even compete with the home-run performance of the nachos: the sweet-smoked barbecue perfectly complemented the ooey-gooey cheddar cheese. I’ve had many a nacho, but this offered a unique twist on a fan favorite.

You’ll have to pinch yourself to remind yourself you’re not actually in Italy after this meal. From authentic Italian staff to Italian words on the menu, Disney does a nice job of creating an illusion of being in Italy. (Heading to the real Italy? Get some tips here!) I opted for the Paccheri alla Crema con Pollo (cream, chicken, pancetta). With my Italian vocabulary being limited to bonjourno and grazie, I had no idea what the heck this pancetta was. But hey, live in the moment! It had to be good, right? And yes, ma’am, it was! (P.S. a quick WordReference search shows pancetta to mean bacon.) The perfectly al dente pasta was covered in a creamy sauce and accompanied by liberal amounts of grilled chicken and pancetta/bacon. I’m glad I didn’t order the standard spaghetti or pepperoni pizza because this was a nice change of pace! Sometimes you step out of your comfort zone and end up wishing you would’ve stuck with a classic; however, this was not the case. 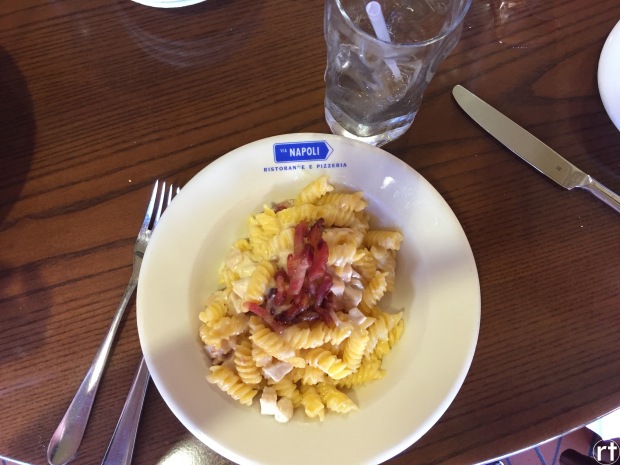 Ahem… buffet? While “all-you-can-eat” may make you think of run-down and cheap, my breakfast at the Garden Grill Restaurant in Epcot was anything but! The menu? Cinnamon buns, gluten-free blueberry muffins (per request), fresh fruit, scrambled eggs, “potato barrels” aka tater tots (very fitting after watching Napoleon Dynamite the previous night lol!), bacon, ham steak and Mickey-shaped waffles! The atmosphere? When you walk in, you’re seated at a table that slowly rotates in a circle around the restaurant through the Living with the Land ride which basically takes you on a boat ride through different “ecosystems” from rainforest to desert. The rundown? Your waiter or waitress will bring your first “course” of cinnamon buns (or gluten-free muffins) and fruit. He or she will later bring out the rest of the food later and second helpings if asked. The potato barrels were perfectly crispy and the ham quite savory! While “all-you-can-eat” may equate to less than quality, this was not the case. And characters like Mickey Mouse, Chip, Dale and Pluto just may stop by your table for a (silent) hello and a photo opt. 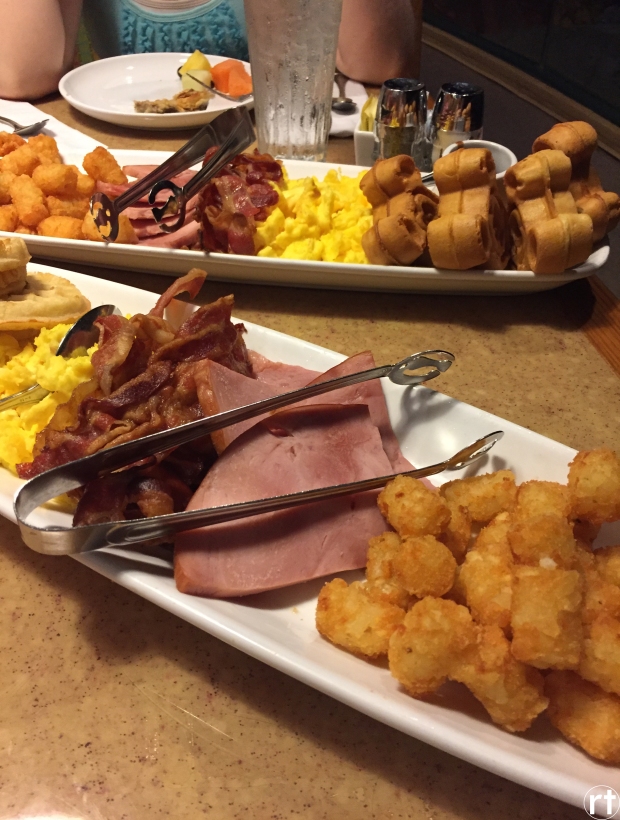 First off, quick-service restaurant? Lol. This is Disney, people, and there are loooong lines… at least when we visited in mid-March. And therefore, tables were terribly difficult to come by.  I chose a Chicken Rice Bowl with black pinto beans, corn salsa and shredded cheese. The large strips of chicken had a nice flavor as did the tortilla chips; this was a substantial yet tasty meal. Even more, the unique aspect of this restaurant is that you order up front like any quick-service, but upon receiving your food, you can head over to the topping bar which ranges from guac to pico, shredded cheese to salsa verde.

AHHHHH!!! The Nob Hill Chill is the best drink I have EVER drank… EVER. This fudgey shake topped with mini chocolate chips left me in silence, closing my eyes in pursuit of indulging in this peaceful moment of inner zen. I was literally drinking a Ghirardelli chocolate bar… duh! I got to the bottom, and the rich fudge sat solid at the bottom, ready for me to finish off. I literally inhaled the entire shake. No shame. No regrets. While you’ve probably only seen Ghirardelli in nice gold-wrapped squares, the brand name takes on a whole new definition. First off, head into the chocolate store part of the building for a free square of chocolate. Walk into the restaurant section of Ghirardelli to place your order, take your number and find a table inside or at the black wrought-iron chairs and tables outside to wait for your chocolate to arrive. 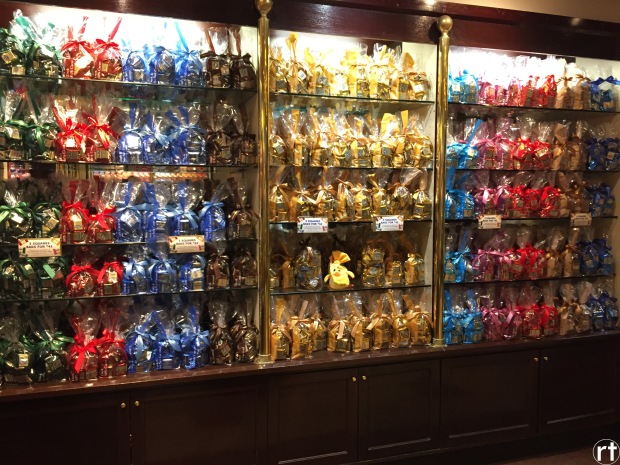 While I tried my best to not sit in a boiling pot of envy of my dear friend and most faithful reader, Maria, I definitely was still a little jealous that she went to France for Spring Break.  And I didn’t…  However, I got a good taste of my favorite place all while being in Disney World. Ready to cool off with some ice cream, Taylor, Riley and I hopped in line at L’Artisan des Glaces. I noted that the workers were France natives, so I strung together my best “je voudrais avoir un sandwich macaron avec du chocolat.” My cashier was plenty nice and continued a little convo with me en français. This flaky yet chewy chocolate macaroon held the scoop of chocolate ice cream together, leaving the sweet combination for my taste buds to indulge upon. I couldn’t hold back; I returned the next day for another Chocolate Macaron Ice Cream Sandwich! Obsessed with Paris like me? Read some quick tips about it here. 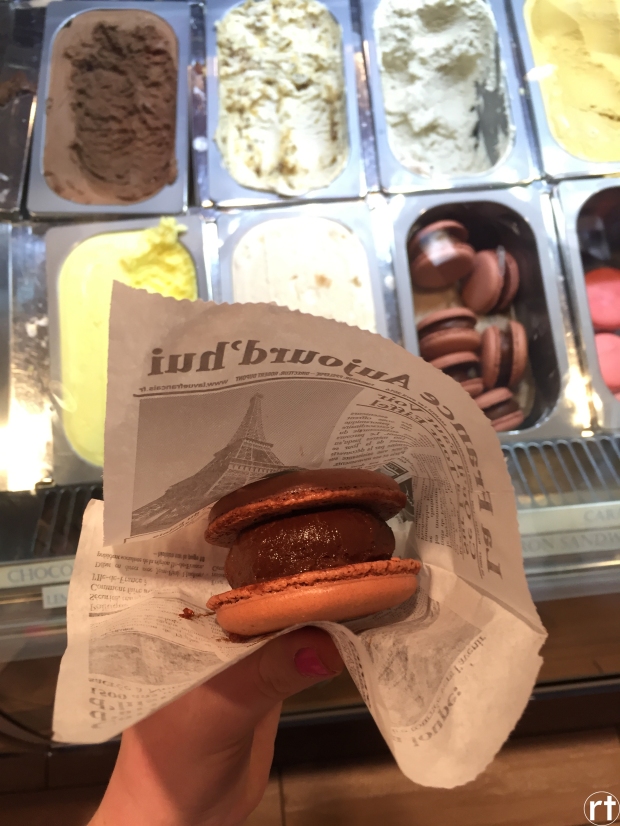 So, you’re telling me that I’ve bought a Park Hopper pass, rental house, rental car, gas, sunscreen, airplane tickets, and now Disney is making me pay for food and drinks?! I know, I know… Craziness. But head over to Club Cool in Epcot for free samples of sodas from other countries ranging from Peru to Zimbabwe. While I didn’t enjoy the carbonated water-like Italian soda, the Pineapple Fanta from Greece was different yet enjoyable.

Okay, sorry, the Honeymoon Phase is over… Meaning that the free stuff isn’t limitless. And yes, this Mickey Ice Cream Bar may be $4.25, but it provides a refreshing treat on a hot day. And it’s Nestle chocolate, not some cheap ehh chocolate. Stop by a stand in virtually any park to find this cold snack.

While I don’t instantly think of caramel corn when I think of Germany, the Werther’s caramel corn drizzled in chocolate that Ally bought in Germany was pretty good. And better than Disney’s “regular” brand (although it can’t beat the best-in-the-entire-world caramel corn made by my mother around Christmas time… but that’s pretty hard to do!).

Home sweet home.  Or should I say home espresso home? Sometimes eating new places and foods every night leaves you craving for some familiarity. Lucky for you there’s a Starbucks in each of the four parks: Magic, Epcot, Animal and Hollywood Studios. F.Y.I… you can use your app to pay and earn starts, but you can’t redeem rewards there. Sad day!

Final Notes: If you have a food allergy or preference, Disney’s got your back. Each restaurant I visited had a specific allergen menu (not a minuscule, hieroglyphic-like table to decipher) or a knowledgeable waiter/waitress. However, I was quite disappointed with the service. It took excessively longer to wait for my gluten-free food. Being gluten-free for over three years, I’m used to waiting, but it was annoying having to wait an additional 15 minutes after ordering to receive my food.

As for reservations, we planned our Fast Passes and restaurant reservations about 1-2 weeks before. However, it would’ve been preferable to do it earlier as these fill up even earlier than we scheduled ours. I know it’s difficult to know if you’ll be in the mood for Italian or straight caramel corn months in advance, but just getting some reservations is obviously better than none.

{Did I miss your favorite dining spot at Disney? Share it in the comments!}

Share with a friend & save for a future adventure!

6 thoughts on “Top 10 Places to Eat at Disney World”

This site uses Akismet to reduce spam. Learn how your comment data is processed.

Bonjour ! My name is Kristin, a travel and lifestyle blogger who's all about exploring new places, practicing my French and telling it like it is. Let's travel to learn together.